The Oracle and Salesforce.com a Love Story (for now….)

But the news that broke just before the July 4th Holiday is a little different….

June 2013 will be remembered as the biggest month for Cloud computing partnerships in the history as  “enemies” seem to becoming  “allies.”

OK. “Allies” and “Enemies” conjures images of “Axis and Allies” and that’s too strong. But make no mistake about it, the sort, but eventful history of Cloud Computing has seen Oracle and Salesforce.com establish themselves as adversaries.

“Adversaries”  might sound too harsh, but let me take you a few years back so that you can see how and try to understand how this new partnership between these two giant companies has the potential to be a turn-key moment in the Cloud Computing moment.. 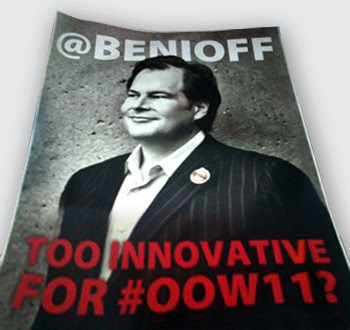 The picture shows a pamphlet distributed by Salesforce.com back in 2011, when at that time Ellison’s team moved SFDC CEO Benioff’s speech at Oracle OpenWorld 11 from Wednesday morning to Thursday morning.

To put this into context, not did this bump Benioff to the final day of the show, it also set him up to present at 8:00 am the morning after Oracle’s annual Treasure Island appreciation party with Sting.

Really, the move came across as more of a  cancellation than a postponement. Benioff reacted that way. Check out the tweet from @benioff that was printed on the back side.  More tweets from that moment here.

And it was all about egos.

Marc and Larry’s duel centered on the key question of “Who owns the Cloud?”  Benioff’s drew laughter from his audience condemning Exadata as saying:  “The false cloud, is not efficient, it is not democratic, it is not economical, and it is not environmental!”

My, How Times Have Changed

Fast forward to 2013. Who would have expected to sit in on a conference call , with more than 200,000 people, to Larry Ellison and Mark Benioff spreading love on the air.  Don’t laugh but these are some of the quotes:

It was a good scripted call where both of them presented a strategic partnership based on the following facts:

If you’re a company that is running Salesforce and you’re thinking of  using Fusion Applications in the cloud, then you benefit.

When and how will you benefit?  That’s is uncertain and it will depend on how the integration will flow with the first company running this that it is for sure Salesforce.com. This will have some negative impact on those organizations that are building products to integrate platforms such as Boomi or Informatica, just to name a few, but the world of integrations is not just Oracle Applications and Salesforce.com.

If you’re running Salesforce, then you might notice the change in the speed of the system and we’ll also have to wait to see how Salesforce.com will leverage the new features of Oracle 12c and Oracle engineer systems (EXA stack) that they just announce as new introductions to their products.

How will this partnership will impact the Oracle Ecosystem?

It is definitely gives Oracle some huge advantages and  we will this deal will doubtlessly make  Oracle Fusion Applications more attractive. . Now, will it really speed up  adoption of  Fusion Apps? Yes,  this will probably provide some real traction, as it reinforces Oracle’s commitment to taking ERP solutions to the Cloud.

If you’re running Applications Unlimited (Oracle E-Business Suite, JD Edwards, Peoplesoft) don’t expect a big change in the roadmap. But you’d better start getting in your plans for Fusion Applications in order right away. The Great Recession forced Oracle to modify its 11i Desupport policies several times. But if adoption of Fusion Applications gains real steam, then expect the suits at Redwood Shores to start setting desupport deadlines that push users towards Fusion Apps.

This love story will continue, by the cold writing of a contract, until 2025 (is it really 12 years?) and we will see at Oracle OpenWorld -I won’t be surprise if it is at the keynote- Larry and Mark hugging to each other and drinking Champagne like the old times when both had the same company in their business cards.