Our recent webcast “Support Your Entire Oracle ERP Lifecycle with UPK” was an outstanding success with close to 250 people registering and just under 190 logging in on the day of the event.

As always, we took advantage of the opportunity to poll the audience, to get their feedback on where they are, what their concerns are and where they seem themselves going. We’re happy to share those results with you now as well as some thoughts from IT Convergence Chief Technology Officer  Gustavo Gonzalez.

These polling results were taken approximately 190 webcast attendees and should not be consider scientific. Also, please note that the percentages do not reflect those who attended but did not participate in a specific question. 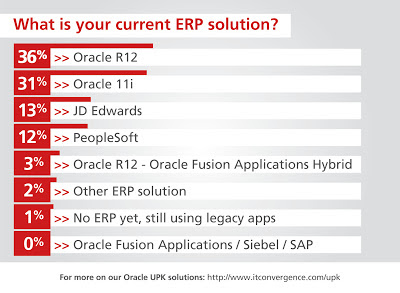 This is the first Webcast poll that we’ve conducted where we’ve had more Oracle R12 users than 11i users. Does this tell us anything about Oracle R12 adoption or do you think it is more reflective of UPK’s usefulness as a tool for those who’ve just completed an upgrade?

My opinion is that the poll answers are mainly based on the webcast timing since Oracle R12 has been out there for quite some time now. The upgrade is a “natural” process that will happen regardless of UPK usefulness. However, this assumption does not minimize the value of UPK. Many case studies showed that companies that used UPK as their training solution have recorded lower costs and reduced many of the risks usually associated with failure in end-user adoption. 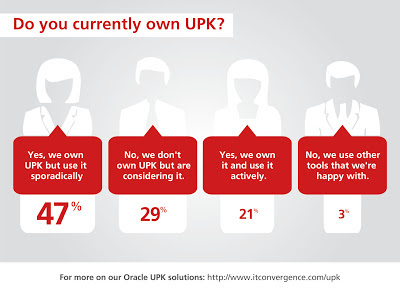 Here were seeing that almost a majority of our audience owns UPK, but isn’t using it widely. What does this tell you?


While we don’t want to risk making too many conclusions from a single polling question, I believe this is indicative of a couple of things. One of the things that typically happens is that when Oracle is purchased, whether its an upgrade or a free implementation, UPK gets  thrown into an application sale and doesn’t get  sold as a value added solution. The message and usage of UPK was not fully and properly conveyed to clients. The poll question here reveals that clients are starting to understand UPK capabilities, the benefits that it can bring to the company and the opportunity to improve the current usage of UPK. 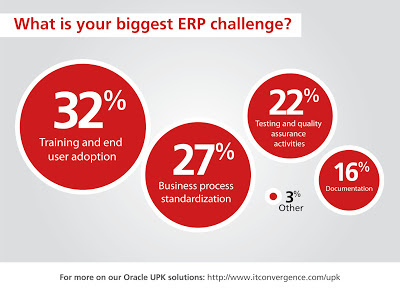 The results of our poll on ERP challenges were quite varied. As a CTO whose led multiple Oracle 10.7, Oracle 11i, Oracle R12, and Oracle Fusion Applications upgrades, what does this tell you?


Even though the challenges of an ERP upgrade or implementation are multiple, the biggest challenge is training and end-user adoption. No matter how solid your implementation or upgrade is if end-users do not know how to perform their jobs due to lack of understanding of the system processes, the project will result in a failure, and its refreshing to see that this fact is so well understood. 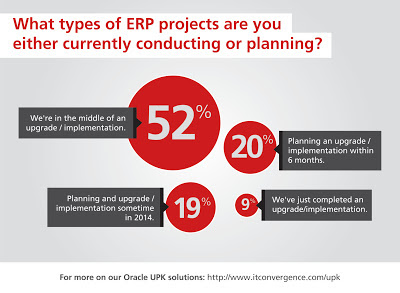 One of the more surprising results that our polling uncovered, is that a majority of the audience was already in the thick of an ERP upgrade or implementation. Now most people would think that if you’re already knee-deep into an Oracle E-Business Suite, PeopleSoft, JD Edwards, Siebel or Fusion Applications upgrade or rollout that trying to incorporate UPK into your project would be more trouble than it is worth. How would you respond to that fear?


My initial response would be first asking the question where are they with the upgrade?

The answer is going to be very dependent on the response I would give.  Overall UPK is heavily used for documentation and training so I would assume that most of poll respondents may be in the middle of an upgrade and are probably doing the documentation and training materials manually. In order to free up their time, and in order to reduce the overall time spent on development of training materials, Oracle UPK would be able to automate and speed-up a lot of the manual work as well as be a tool that can be used for reinforcement and support later on the in project lifecycle.

Taking into consideration the fact that the biggest challenge is end user adoption, which is also shown in the previous survey question, you cannot “over-train” your end-users or “over-communicate” the change management concepts.

Find Out How You Can Make the Most of UPK Today


If you missed our August webcast but still want to know more about Oracle UPK, you’re in luck.
You can click here to register for our webcast “Beef Up Your Oracle ERP Testing with OATS and UPK” which will be held on September 12 at 8:00 am Pacific/11:00 am Eastern.

And if you’re only finding this blog entry after September 12, 2013 worry not. We invite you to see our Oracle UPK mini-site which provides you with a comprehensive overview of this transformational tool.